skip to main | skip to sidebar

Almost a joke to call it that... I'ts cold enough to be winther already >____< Well... our one week vacation went by kind of quick. Besides the GaGa concert, I've also been meeting up with people, working and the last weekend Cosplay Ready III took place. I mostly made stuff for my sisters Perona cosplay, but also some minor stuff for my own ones. 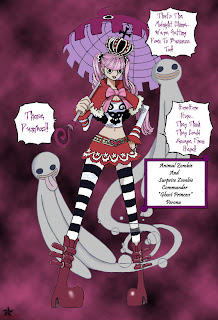 For those who know not of One Piece, this be Perona the Ghost Princess. Rosas upcoming cosplay xD
I've made the flower thingies for the hair, and I'm in the process of painting the crown and making the belt ^w^ Hopefully her boots will arrive in time O___o

So... under three weeks until J-pop con... I'm quite confident about making it in time, but I don't have any REALLY SPECTACULAR cosplay this time... (Maybe except for my secret cosplay >:3) So I'll probably be one of those people who runs around with a camera for once xD 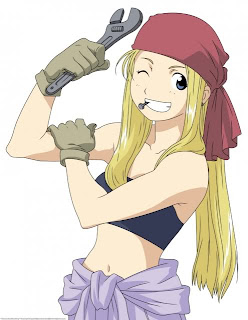 At this point, where I only have a little less than 10 chapters left of the Fullmetal Alchemist manga, I'm getting more and more excited about cosplaying Winry Rockbell x3
I've even ordered a new and better wig than my Lucy cosplay one (which I had originally planned to use), and I'm trying to decide weather or not to wear blue contact lenses ^w^
Sara will be cosplaying as Edward Elric, so we'll be a kickass team xD
I only need to recieve and style the wig and make her sandals.

So... that's my cosplay for the J-pop con friday, and for the saturday one, I'm joining a Thriller Bark cosplay group as Cindry once again :3 That's the same group Rosa will be Perona for :D
One Piece FTW! xD

"Plates must vanish from this world >:E"

And for the sunday cosplay? Weeeeell... It's still a secret! Or at least for some people xD
Indsendt af Nadia kl. 14.13 2 kommentarer:

What a day yesterday was!
I used from 9 am. to 1 pm. to create an outfit, and then Christine and I took a bus ride for 4 hours to get to Herning.
Around 6 pm. we arrived at the concert place to see Lady Gaga :D
And what a show! I soooo loved the scenographies and the dancing choreographies, and Gaga surely hit us hard with all her monster hits! It was an evening full of dancing and wonderful lights and music.

But I also have to admit that there was another feeling to it...
I almost kind of wish that the person on stage was someone else. All of a sudden Gaga became so human! She showed her weaknesses and her ugliness which left me with the thought: "That could have been me on stage..."
And you might think of that as a good thing, but when it comes to Lady Gaga I would really prefer to see her as some kind og superstar idol who never makes any mistakes, who's always perfect!
Like she said herself: "I would prefer a big dose of bullshit every day, instead of the truth!"

But I guess I'll just keep imagining her as someone divine and perfect, and just remember the words she said to all us little monsters :3

It's been an experience for life, and I really enjoyed spending the day with Christine as well :3

So here's the great outfit xD 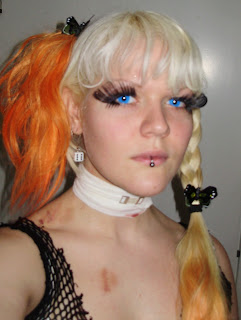 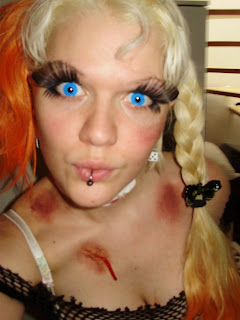 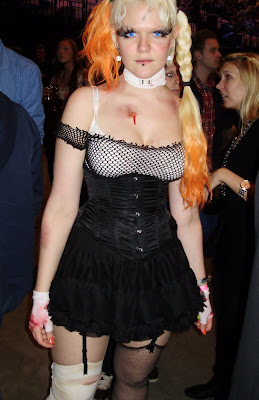 It's very hard to tell in the picture, but I had made fake bruises on my neck and arms.
My inspirations were a little bit of Halloween, Gagas MTV performance outfit and the lolita look.
My mom thought I looked kind of like a german Heidi girl though xD (which I actually don't mind xD)
I was one of the only people dressed up really wildly, but I loved that! My thought was: "Why not dress up?! It's a freakin Lady Gaga concert for fuck sake! xD"
Indsendt af Nadia kl. 06.42 2 kommentarer:

Hair on fire and heartache

Oh goth... so much crap has been going on in my private life lately... I've already been blogging my heart out at my BlackMarket blog, so I will spare you the story :p It's just freakin' sad and messed up anyway...
Long story short, I'm single now :p

It's not easy having yourself a good time, but I'm trying my very best xD
Today I decided that it was time for my awesome hair makeover! :3 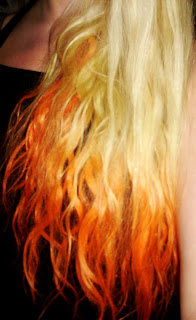 I absolutely love it!

After my slightly fail attempt at dying it green the last time, this is just amazing! I'm planning on keeping it this way and re-dying it for some time :D

I used three different colors, actually, but the orange one is the only one you can really see clearly. Maybe I'll dye in some more red later in the ends. 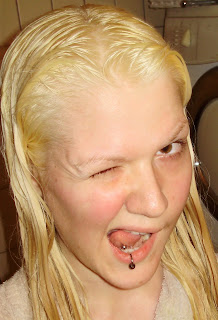 *wink wink*
First a re-bleach of my hair roots, and a picture of it, simply because I look so damn sexy, when I look kinda bald xD 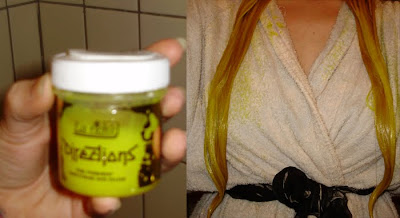 Color 1# Directions; Bright Daffodil.
I felt kind of stupid using this one, since it practically disappeared after washing it out, 'cause of my already quite yellow hair -_-' 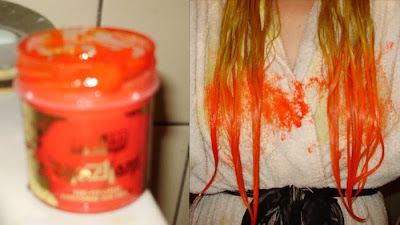 Color 2# Directions; Mandarin.
This became the most dominationg color of them all, and. I would never have thought that my hair ends would look this good in this Nami styled hair color xD 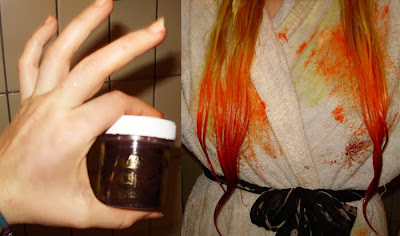 Color 3# Directions; Flame.
It might look cool in the picture, but this color vanished almost completely after washing it out ;__; Next time I'll leave it in for longer :D
I also believe that this was the point where I decided, to never use that dirty old bathrobe again xD 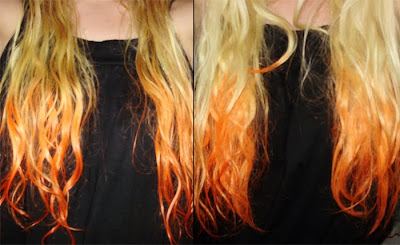 Finished! Wet and dry xD Just have to say it again, I love it!

To take good care of my new lovely hair, I've spoiled myself with some amazing hair products. I've decided to try out a Franck Provost shampoo and conditioner, and from only one use, my hair already feels sooo soft and looks a lot healthier than it have done for some time now xD

And now for something completely different...
I just watched Fight Club for the first time with my sister here this evening, and I have to say that I LOVE IT!
I already have a love for "thinking" movies but it was also sooo refreshing watching a movie like not many others for once... I don't even know the word for it, but I would just call it... epic xD
...plus Edward Norton and Brad Pitt are an perfect eye candy bonus xD 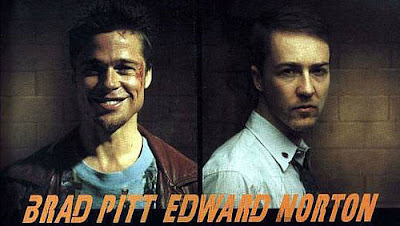 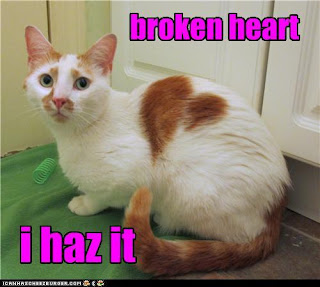 Villain for a night

So, the Hero & Villain party was yesterday, and I absolutely loved it! I had such an amazing time and there were so many awesome costumes!
I really enjoyed how I for once could dress up, kind of simple and comfortable, and still be so recognizable :D
A lot of people, even random ones just passing by, recognized me as Elle Driver from Kill Bill 2 xD

This costume was surprisingly good, even though I barely spend a day putting it together xD

Such a lovely event, where people actually showed up to look awesome, and not just to get drunk. We need to have more costume-parties like that! 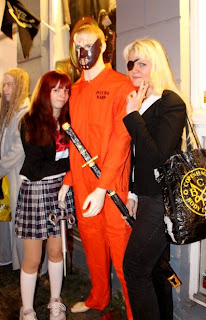 My sister and I AKA Gogo Yubari and Elle Driver, as Hannibal Lectors hencemen xD

Something that have come to my attention, is some people who has expressed their negative thoughts about me cosplaying guys... And that really makes me want to scream "WTF?!"
I might LOOK very girly, but I'm really not all that feminine... It's mostly my looks, but my personality can be quite boy'ish.
So, why can't I cosplay a guy?
Why do some guys find it funny and/or weird/fucked up that I cosplay men?
Is it because of my body type or because I'm just not very guy'ish or simply because they find crossplaying creepy?!
I PREFER cosplaying men! It's absolutely the most fun and nothing can stop me! >:E

I prefer female costumes when it comes to any other dress up genre though xD lol how ironic...
Indsendt af Nadia kl. 14.11 Ingen kommentarer: